These are my moccasins from when my dad married my mom. I hated wearing them because it meant I’d be wearing a traditional dress. 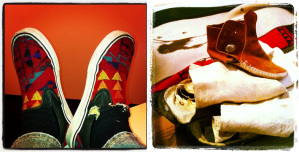 One day, my mom and aunts chased me all over the village. I threw such a huge fit when I was tricked into returning to my grandmother’s house. A promise of a cheeseburger, I’m sure. Finally at the end of it all, there I stood tear streaked face, traditional dress and cowboy boots. It was a war of compromises. Later, after realizing the relationship between the appearance of moccasins and having to wear a dress, I wore them on my kindergarten Indian Day and stepped in a puddle. Leather shrinks and hardens. They have stayed that way since. That was the last time I wore them.

My beloved red moccasins – I loved those moccasins so much! I wore them until I was 6 years old and would have worn them longer, but I was bribed with a brand new pair of black tennis shoes from Yellow Front. The stitches are different because different tahas (uncle) and qua’as (grandfather) had to sew them together when I broke the stitching from the sole. A result of climbing rocks and jumping from bicycles instead of using breaks. I loved them so much I packed them in my sea bag and took them around the world when I was in the Navy. These have been my prized possessions. As an adult, I don’t have moccasins. One day I would like to get a good pair of red moccasins.  Then I would like to wear them for a year.
I have a pair of Custom Pendleton Vans shoes I bought at the Gathering of Nations at the All Nations Skate booth back in 2010. I wear these shoes faithfully. I wanted to wear something on Roc your Moc’s day and these were the closest to moccasins that I have. Feels like those red moccasins I had so long ago. Next year I will surely be wearing moccasins for this annual event.

Rock Your Moc’s is an annual event that occurred November 15,2012 – Thanks you organizers. See you next year!
http://www.facebook.com/RockYourMocs